You asked for it and Microsoft listened, the Start menu is coming back to Windows, though it won’t be released with Windows 8.1 Update on April 8th, the company said that will be part of a future update planned for later this year.

Looking at the today’s tease demo at the Build developer conference the new Start menu looks like in part to the old Start menu in Windows 7 mixed with the Windows 8.1 Start screen. You have your beloved search box in be bottom-right corner, access to “All Apps”, a list of recent and pinned apps, and on the right you’ll notice a mini Start screen with live tiles (all sizes are supported) and even the new context menu seems to work in the menu. 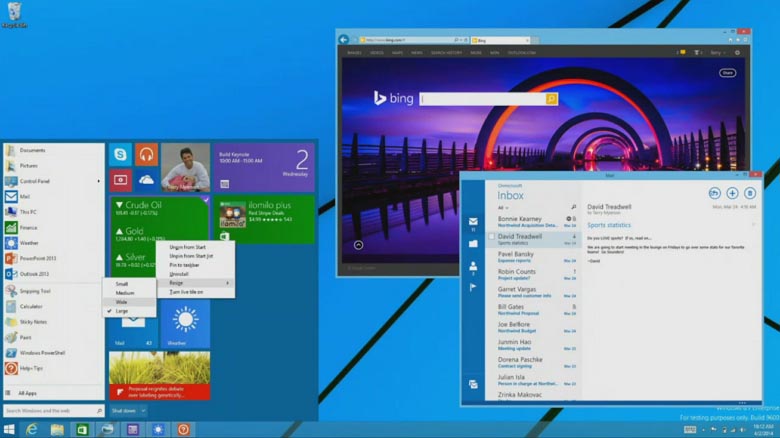 In the same demo Microsoft provided an early look to how Windows 8 apps will extend to the desktop in a windowed environment. Change that will help users using PC with keyboard and mouse navigate and interact with the operating system more easily.

Regardless of the changes you see coming into Windows 8.1 and future releases such as Windows 9, be sure to know that Microsoft won’t move away from the modern design and Start screen — they are here to stay.

Microsoft is scheduled to release the first major update for Window 8.1, simply called “Windows 8.1 Update”, but neither changes will be released on the update for April 8th, 2014. These are just plans for a future update, however users won’t have to wait a really long time as they will happen before the end of 2014.

Update: Microsoft won’t release the new Start menu with the release of Windows 8.1 Update 2, instead the company is planning to ship the menu in Windows Threshold, the next version of Windows, which may or may not be called “Windows 9” and it’s scheduled to release in 2015.